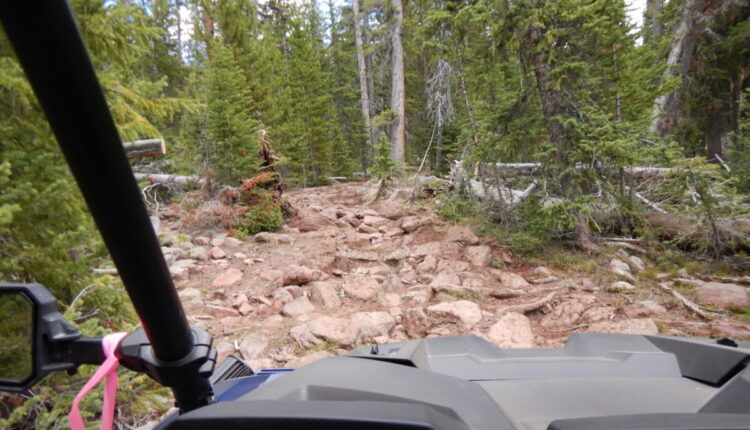 Exploring the Dyer Mine Loop on an ATV | News, sports, jobs

Negotiating the rock garden on the Dyer Mine Loop.

On the Dyer Mine Loop Trail.

The Outlaw ATV Jamboree 2021 is in the history books now, but not before I’ve tried some of the rides on offer at that event. Leisha Coltharp of the Uintah County Travel and Tourism Board came up with the formula for a hugely successful jamboree.

The first jamboree, held in Vernal seven years ago, attracted 30 riders. This year over 700 riders took part and they came from all over the country.

Since I’ve never ridden any of the Vernal trails, my buddy Dar Duncan, who has been to this jamboree before, recommended the Dyer Mine Loop ride.

The beauty of this ride started before we got to the trailhead. We took Highway 191 north of Vernal and passed Steinaker State Park, which has all the amenities of Steinaker Lake.

Before 1964 there was no lake. The groundbreaking ceremony for the dam that formed the lake took place in 1961 and was attended by the then 81-year-old John Steinaker. The park and lake are named in honor of his family who pioneered the region.

While passing the lake, I was reminded of this route that I used to take as a grocery seller. It’s a nice way to get to Vernal from Rock Springs, Wyoming.

We drove 20 miles into the Ashley National Forest to Diamond Plateau Road, where we stopped to unload. It is a calm and peaceful meadow at an altitude of just over 2,200 meters.

We followed Diamond Plateau Road for about half a mile, turned south, and crossed Bassett Creek. It was early enough in spring for the grass to be green. We followed a path through meadows with aspen groves and sage bushes.

The trail took us down on a loop over Little Brush Creek that took us back to cross the highway. If you look at a map of our journey, the path formed a figure eight with two connecting loops.

Following a series of forest service roads, we drove on a ridge over a canyon through which Big Brush Creek flowed. Further north we came to Iron Springs Campground, where lunch was offered as part of the perks of this ride.

The campsite is located in a forest with old and very tall pine trees with plenty of cool shade. We met while we were enjoying the meal.

With a filled stomach, we recorded a section of the Red Cloud Loop Trail. About 3 miles later we turned onto a forest road and crossed Big Brush Creek. I know we’ve been to Big Brush Creek, but these trails aren’t straighter than the streams.

After crossing this creek, we followed Anderson Creek. As we started around the base of Dyer Mountain, we encountered the rock garden. I remember some trails for their beauty and some for the beauty that is overlooked when riding the trail.

The rockery was only about a mile long, but there is a big difference between a fast mile and a slow mile. There was nothing fast on this mile.

I have good ground clearance on my RZR (14 in), and I haven’t hit rock bottom, but I could hear riders hitting some of these rocks pretty hard. Nobody was disappointed to have this section behind them. As we traveled 10,000 feet around the east side of Dyer Mountain, we came to the location of the Dyer Mine.

The Dyer Mine, discovered in 1887, produced copper and some gold. A smelter was built near the mine, which produced a large slag pile. We took the time to explore the mine area and found evidence of copper in the cinder we picked up.

There was a lot of mining activity in the area and although copper was the most common, claims were filed more often than gold and silver. In a story created by the Forest Service called “Men on the Mountain,” the dye mine produced a lot of copper, but before that it was sold for 200 pounds of flour. It turned out to be a good deal for one of the parties.

I have never failed to enjoy the history of the Utah mountains. The mining history is particularly colorful and interesting.

We drove back to Diamond Plateau Road where we finished a drive of about 53 miles. Bring plenty of water, hold the rubber side down, and soak up the history of upstate Utah.

The Ogden Yoga Fest comes to The Monarch | in September News, sports, jobs