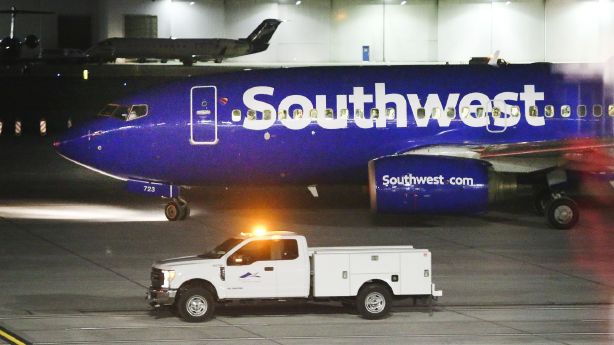 A Southwest aircraft is being escorted as it takes its first flight from the new Concourse B of Salt Lake City International Airport in Salt Lake City on October 27, 2020. Lasers hitting aircraft continue to be a problem in the United States and Utah. (Jeffrey D. Allred, Deseret News)

SALT LAKE CITY – Laser attacks on planes are picking up again, and the Federal Aviation Administration warns that criminals can face hefty fines if caught.

The FAA has received almost as many laser attack reports this year as it has all last year, and Utah is one of the most troubled states.

KSL-TV first reported on this 17 years ago and the problem has only gotten worse. At the time, there were few reports of laser strikes in Utah each year and only a few hundred nationwide.

“This is a real, serious security problem for us,” said Ian Gregor, an FAA spokesman.

“Exposing an aircraft with a laser can distract or even temporarily blind the pilot, and that can be very, very serious,” the FAA spokesman said.

Especially when the aircraft is in the sensitive take-off or landing phase.

“People don’t understand how dangerous it is to be hit in the eye with a laser,” said Ben Tidswell, KSL Chopper 5 pilot.

But it does – Chopper 5 has been a target for lasers in the past.

“We got hit a couple of times,” said Tidswell. “One of my backup pilots was attacked. But I know from reports that the FAA is reporting that there are frequent laser strikes on airliners flying into Salt Lake City.”

Two years ago, when Chopper 5 was filming a video in Utah County, a light flashed in the cockpit as the photographer on board switched the camera on to the laser.

“We actually got the person who was shining a laser on us,” said the pilot.

So how is it in the cockpit when the laser shines in?

“Imagine you’re about 15 feet from a car with its headlights on high beam and looking straight into a headlight,” said Tidswell. “It’s very bright, it’s very dazzling, it’s very uncomfortable.”

“There have been a number of cases where people have been sentenced to prison terms for aiming lasers at planes,” said Gregor.

According to FAA statistics, this crime actually declined from its peak in 2015 and 2016. Laser attacks picked up again during the pandemic, although there were fewer airborne flights.