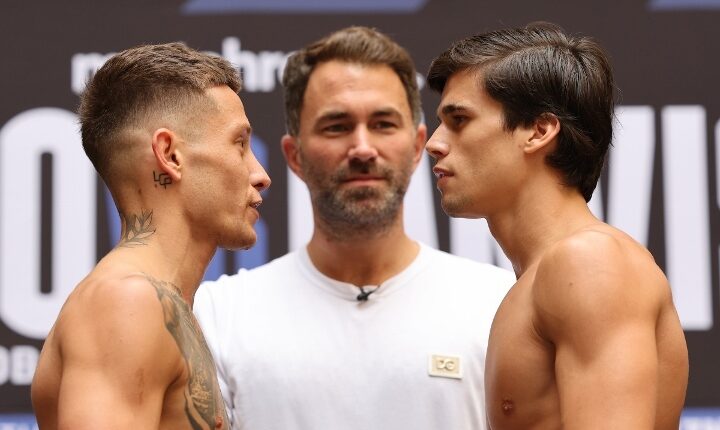 Cesar Mateo Tapia threatened to make quick work of Abdoulaye Mayweather Sakho but instead settled for a distance win.

A battle of unbeaten super middleweights saw Tapia take a ten-round, unanimous decision win over a brave Sakho in their DAZN-aired contest Saturday at South Bank Piazza in South Brisbane, Australia. Judges Rodney Marsh (99-91), Paul Williams (97-93) and Alan Burford (97-93) all scored in favor of Tapia, a Tijuana-born prospect now based out of Narrabeen, New South Wales and who has emerged as a regional favourite.

Tapia was steady and potent in the early stages of the fight. Sakho struggled to get his offense going, forced to rely on a sturdy chin as he absorbed a number of clean right hands upstairs. Tapia constantly applied pressure, walking down his countryman and forcing him against the ropes early and often.

Momentum and tempo rarely shifted, even as Sakho was able to punch in combination. Tapia was unbothered by the incoming, intent on making the locally based Sakho feel his power. He did so often, including a sequence early in round six where a right hand wobbled Sakho who somehow stayed upright.

Sakho turned the tide in the final minute of round eight. Tapia was a little too bold in his attack, failing to defend against the long jab of Sakho who also mixed in some straight rights prior to the bell.

Sakho picked up on that momentum shift, launching a straight right at the very start of round nine. Tapia shook off the blow and offered a more disciplined attack as he worked behind the jab. Both landed overhand rights midway through the round, Tapia appearing to get the better of the sequence.

Tapia survived a final surge by Sakho to improve to 15-0 (9KOs). Sakho suffers his first career defeat, falling to 7-1 (5KOs)

Ambitious rookie Rocky Ogden made quick work of Ben Cameron Hands, scoring a first-round knockout in their Australian junior lightweight title fight. Hands was floored hard by a final right hand, barely beating the count but in no condition to continue as referee Tony Kettlewell held the contest at 2:33 of round one.

The bout kicked off Matchroom Boxing’s DAZN debut in the Australian market, with Ogden quickly rising to the occasion. The 23-year-old from Gold Coast launched a series of rights, forcing hands to go to earmuff defense early in the fight. Hands managed an occasional left hook but mostly spent the brief affair under siege as Ogden (3-0, 3KOs)—already fighting his second ten-round bout through just three pro fights—was relentless with overhand rights and uppercuts from both sides in determination to make it an early night.

A final right caught Hands (3-1, 1KO) clean, forcing him to tip over on his side to the canvas to ultimately end the contest.

Jake Donovan is a senior writer for BoxingScene.com. Twitter: @JakeNDaBox