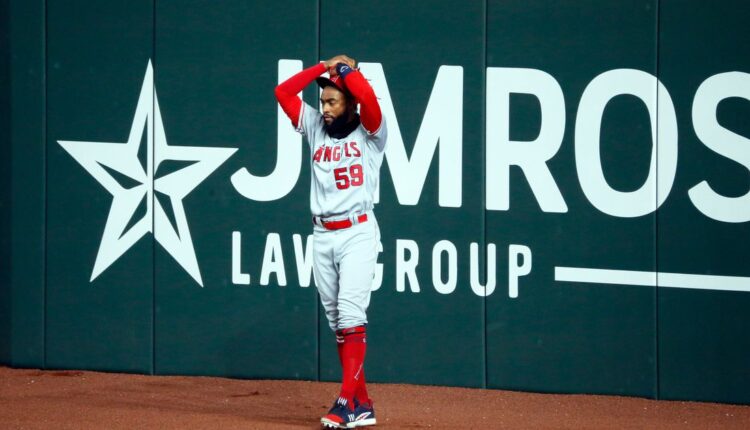 Los Angeles Angels right fielder Jo Adell puts his hands on his head after a fly ball by Texas Rangers’ Nick Solak popped out of his glove and over the right field wall for a solo home run during the fifth inning of a baseball game in Arlington, Texas, Sunday, Aug. 9, 2020. (AP Photo/Ray Carlin)

He wasn’t necessarily upset or even unhappy when Angels manager Joe Madden pulled him aside in Boston to say he would be optioned to the minor leagues.

But for the 23-year-old, he figured he had bought himself more time. Following an RBI double against the White Sox last week — helping Los Angeles to a 6-5 win — Adell thought he had at least shown enough for the Angels to think he was rounding the corner.

Just last month, the organization made a public commitment to one of the top prospects in baseball. They cut longtime outfielder Justin Upton in favor of Adell. Presumably, it meant he was their long-term solution going forward.

“It kind of came out of nowhere,” Adell said, noting there were no conversations prior to his demotion.

“When you don’t play every day you kind of wonder what is going on. But I didn’t see it happening. I did the best I could. I contributed and helped us win games.”

Adell was optioned to Triple-A Salt Lake City on Tuesday and reported to the team on Friday. The opening day starter for the Angels, and the top prospect in the organization in 2019, now has some unexpected early turbulence in his career. And, he says, he doesn’t know the exact blueprint anymore to get back to the majors.

Sure, he’s young. But out of the two times he was previously optioned, this one felt different.

This time, Angels general manager Perry Minasian made it clear Adell was supposed to stick in the majors. Usually, when you give the keys to the top prospect, they don’t get sent down. Certainly not after a month.

“Obviously it was not my decision,” Adell said. “I don’t think there is an exact science to get back to the big leagues. I don’t really know what exactly it will take or what there is left to show.”

Adell’s first 19 games in the majors this season have been a struggle. He is batting just .231 and averaging over a strikeout per game. What’s worse is he is barely making contact. He is in the fourth percentile in MLB when it comes to swings and misses and the second percentile in outs above average.

For his struggles at the plate, his defense has also been a disaster. He had three errors in under 50 innings played. That included a rare four-base error where he misplayed a ball in left field.

“It’s tough,” Salt Lake Bees manager Lou Marson said. “Give him a couple of days to decompress and think about what he did, and what he needs to work on. Everything will be all right. But there is a lot of work to be done and we will get it done.”

Adell disagreed he had to decompress. He sees a player who had a six-game hitting streak late in April, despite not playing every day. He also had three home runs and nine RBIs. He felt ready to contribute now.

“I started playing every third day,” Adell said. “They were doing a lot of matchups in the lineup and kind of threw me aside a little bit in terms of the matchups. So now I can play every day.”

There is no timeline for Adell’s return right now. He expects to play every day in Triple-A, something he wasn’t able to do for Angels. He acknowledged he is more comfortable when he is getting consistent at-bats.

Marson mentions the obvious things the Angels want him to work on. Staying in the zone and defense are at the top of the list.

But everyone knows the biggest challenge will be the mental side. For now, Adell is approaching it like a normal assignment.

In the last week, he talked to his family and flew back to Los Angeles to pick up a couple of things. Then he reported to Salt Lake.

“From the outside it seems so devastating,” Adell said. “But it is not. It happens all the time. This game is different than it was years ago. Options are happening left and right. … I’m just going on business as usual and hopefully get back.”