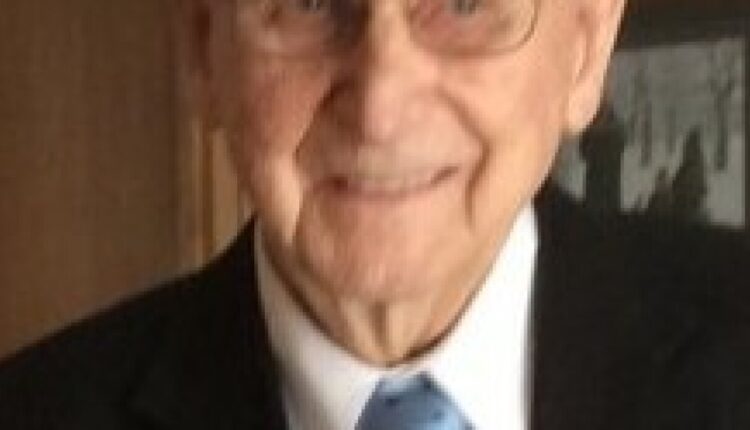 Ogden was born in Hawley Township, rural Hawley, MN, on April 7, 1923, to Ole H. and Anna (Sandtorv) Ramstad. Ogden was baptized and confirmed at Hawley Lutheran Church. One of three children, Ogden grew up on the family farm and attended school in Hawley. Like all farm families at that time, from a very young age Ogden helped with the work of a farm. After the death of his beloved mother, Anna, Ogden left school and worked fulltime with his father on the family farm. Ogden’s love for farming and caring for livestock grew each year of his farming career and was shared by his wife and daughters. During WWII, Ogden served in the US Navy aboard the USS Ingraham and upon his honorable discharge, he returned to his first love, farming.

On October 3, 1947, Ogden married Marjorie (Margie) Jegtvig in Moorhead, MN. The ethic of hard work that he learned as a child followed Ogden throughout his life. A true ‘dynamic duo,’ Ogden and Margie worked together in operating a small grain/dairy farm that was designated in 2018 as a ‘Century Farm.’ In addition to farming, Ogden also worked for several years during the sugar beet harvest at American Crystal Sugar in Moorhead and developed many special friendships.

Ogden was a member of Hawley Lutheran Church and a charter member of Living Grace Lutheran Church in Hawley, MN. Ogden’s strong faith in his God was an example for his wife and daughters and sustained him during tough times, health issues and loss of loved ones.

Ogden enjoyed mowing and working in the yard, fishing, figuring out how to fix a wide range of mechanical ‘puzzles’ and woodworking in “His Place,” hosting family events at ‘the farm,’ traveling and sharing time with his family and friends . A devoted father, he instilled in his daughters the desire to work hard, to love and care for the farm and livestock, and to take care of the environment.

Ogden is survived by his daughters, Phyllis Ramstad and Loretta Ramstad, both of Hawley, MN; his ‘special’ Norwegian Elkhound, Maddie (aka Buddie); brother-in-law, E. Roger Jegtvig, Moorhead, MN; niece, Ann (Brandser) Rynning; and many nieces and nephews. Ogden was preceded in death by his wife, Marjorie; his infant daughter, Kathryn Ann; his parents, Ole and Anna (Sandtorv) Ramstad; his brother, Earl and his sister, Claribel (Ramstad) Brandser.

Ogden’s family is grateful to Dr. Kouba of Sanford Medical Center for his care and support over the years.

Burial will be in Hawley Cemetery.