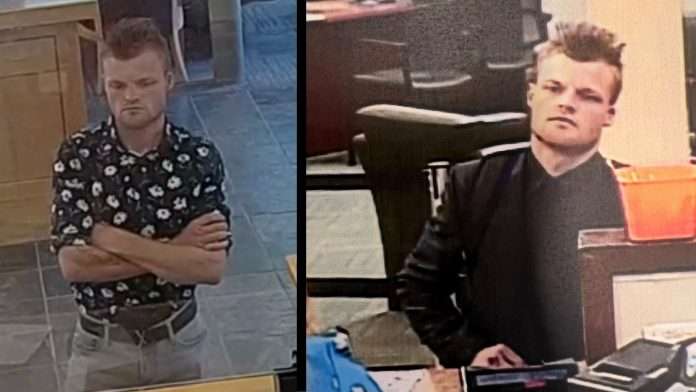 Police are asking for the public’s help identifying a man believed to be involved in a pair of bank robberies in Salt Lake City and Sandy on Tuesday, June 21, 2022. Photo: Salt Lake City Police Department

Police say a white man in his mid-20s was first involved in a robbery at 4:23 pm at Deseret Credit Union, 9325 South Village Shop Drive, Sandy. Police say the man had an exposed firearm in the front waistband of his pants and touched the weapon several times during the robbery.

At 5:52 pm, police say the same man passed a note to a bank employee and referenced having a firearm at America First Credit Union, 1799 S. Pioneer Road, Salt Lake City.

The man is described as 5 feet 6 inches tall, with a skinny build and slight facial hair, according to a news release from the Salt Lake City Police Department. He was last seen wearing a light-colored, button-up shirt with a collar and dark dress pants with a belt.

Anyone with information about the man’s identity is asked to call 911.