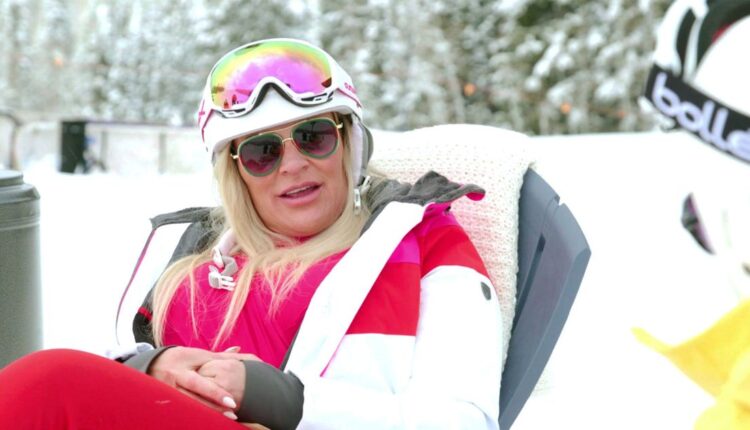 I finally get it. No, not why Jen finally wanted to apologize to Brooks, why Meredith stayed with Seth, or why Lisa made her voice sound like a couple of raccoons mating in a Net-a-Porter polybag. What I finally understand is how First Lady Mary Cosby manages to convince people to sip whatever she serves at Faith Temple Pentecostal Church. Because this episode is a master class in sitting down and ironing out – the women play musical chairs until almost all feuds are put down. So much is happening! And somehow my only real realization is that Mary Cosby’s style of oral storytelling is both terrifying and unprecedented. The voltage? The twists? The social comment and greater metaphorical value that just lurks behind the surface? I’ve never seen anything like it, and I watched six episodes of Squid Game before starting my little internet job in Salt Lake City. Before I do a dissertation on the subversive narrative structure and unexpected parallels between Mary and Agatha Christie, I think we should get into all of the peace-making conversations on this television show here.

Over at the Barlow Residence, Lisa and John sit down to talk about “Last Night.” Lisa is pissed off that she was mugged (eh, not really), taken by surprise (maybe), and wasted a Gucci outfit (absolutely not – if nothing else, this whole situation was a huge win for sequined tits). Rather than discussing Angie and the catering drama, the Barlows get into Whitney “by injecting themselves into a 24-year friendship.” Lisa appears to be far more annoyed about Whitney walking into a room drunk than Angie’s allegations of catering sabotage. John doesn’t care about cousins ​​or caterers. He’s all like, “Just to play the devil’s advocate, maybe you can make it so Justin and I can hang; Dunno, just a thought, don’t worry if not, xoxo. ”Lisa says she can’t have toxic, unhealthy energy around her, and wow, let me let you share your own thoughts about ordering fish at Del Taco .

Meanwhile, Mary struts to Whitney’s with a Tupperware container of homemade biscuits and a bucket full of Delirium. She explains that she is too tired to give a baking lesson. Why do you ask? Do not worry. I transcribed the entire scene which somehow didn’t come from a leaked script of another reboot of Arrested Development.

Maria: “I’m so tired. One of the members in our church, your daughter, had an accident! “

Mary: “Today, like last night. She was thrown out of the sunroof. And fell in a neighborhood … 30 feet … falling off the freeway. “

Bobbi: “Is she still alive?”

MY JAW IS STILL ON THE FLOOR. WHAT A RIDE. Mary somehow comes straight back to planet earth and berates Whitney for not caring if Lisa likes her. Whitney admits she needs Lisa’s respect or acceptance, and girls, no! I promise you don’t need this mean lady to like you. Especially since the main reason she doesn’t like you is general disgust at your perceived lack of intelligence and class. It’s a losing game with an ever-moving target – the only way to win is by not playing.

The day has finally come for the Jen and Brooks showdown. In Jen’s corner we have second assistant Murilo ready to do his best, Fonzworth Bentley, and make sure not a single snowflake lands on Jen’s Gucci monogram moment. In Brooks’ corner, Meredith lurks at the bar in a look that can only be described as a “Joker stair dance, now with 214 percent more breasts!” can be designated. Who will prevail? The answer is nobody. No drinks are thrown. No votes are raised. It’s a surprisingly serious conversation that ends with Jen getting Brooks to comfort her after crying about having to distract from her “Gigi”.

Oh, did you think we’d all be done with the private parts because the vagina saga is coming to an end? So buckle up, baby, because the candles are lit, the animal throws are in place, and the boys are outside in a place called BODEGA. John orders tequila the old-fashioned way because Lisa takes his pocket money away and lets him stay in the mailbox if he forgets to somehow include VIDA® in the conversation. Coach Shah wants to snoop around and not talk about the ladies. Seth takes this as an invitation to tell Justin that his marriage looks best and then poke a rape joke on his own wife. BAD. VERY BAD. Then the brothers try to find a way for their sweet ladies to make peace, but are interrupted by a haunt of the ghost women of past episodes and lose him in various states of complete blackout. It’s a doomed union attempt because all the optimism in the world doesn’t change the way Bravo makes numbers. No more drama = no more show = no more paychecks and no more sponsored ho-down-bro-down.

Whitney and Jennie continue the feud that only exists in my head between Valter’s Osteria and every other Italian restaurant in Salt Lake City. Whitney says she had way too much on her plate after ordering a heaping plate of lasagna classica alla Bolognese to buy up her business partner while she was secretly praying for a vasectomy-false pregnancy. But “she loves it.” Sounds like a total girl-boss nightmare to me, and Jennie seems to agree, since she’s already sold most of her business to spend more time with her kids. Jennie also rattles down a list of Lisa’s redeeming qualities, including: having fun, not talking about people, and making sure she has the facts before she opens her mouth. At this point, I’m assuming either Lisa is a completely different person behind the camera or that each of her friends is receiving an endless stream of VIDA Añejo, Kit Kats, and 7-Eleven gift cards to help spread this propaganda. Preferably the latter, and Lisa would be wise to take the truthfulness to a passable level by adding a few talking points about her incredible hair.

Ok i need to know Has anyone found out the source material of Heather’s sexual awakening? I immersed myself in the “Chicken Sex Pop-Up Book” and the “Taps Breast Scene” and got by empty handed. (Heather, if you’re reading this, please send me a DM on the social media platform of your choice with the chicken book info, or I’ll never find peace again. Thanks!) To her dream school UCSB, so Meredith rushes in, to Teaching Heather an important lesson. No, not about how to maintain a monotonous affect in every situation or how to turn blazers into loungewear despite all odds. But about how to move from “mother terrified of sex” to “mother terrified of abstinence”. Aside from the strange hatred of Capri Sun, Meredith seems to be giving good advice. I’m not an expert, but maybe Mary and her fishy-lilac-purple nonsense would benefit from looking at these tapes.

From John Barlow’s whispering lips to God’s ears, Whitney and Lisa sit down to have hashish over cake and ginkel. When Lisa thinks of gin, she thinks of new beginnings. Girl i suppose I need to know who is writing confessional jokes this season, because gin is much more of an “internal accounting and an excursion to sit anonymously in a circle in your local church cellar” new beginning situation than a “for us and only for us” novelty -Initial situation.

At the beginning, Whitney asks Lisa with high pressure why she has a problem with her, and Lisa simply says: “No, no, no, no problem, all misunderstandings.” Whitney then lists half a dozen rude things while Lisa cackles with pride and insists she meant none of them. How was that meant? Is there an alternative reading to “Don’t claim her as your cousin?” People need to know. After a lot of word salad, Lisa wonders where to go next. Hypnotized by Lisa’s spindly fingers dipping a piece of cheddar in pecan slime that could send her into anaphylaxis, Whitney suggests leaving the past in the past and moving on. The Sag and Libra fly free into the sunset, giving John and Justin each another 15 minutes of allotted screen time to write each other over fantasy football details or bad views of Dave Chappelle or, I don’t know what straight men do? even talk about it? Do we think John is more of a guy, brother, man, or buddy? Is there a group text? What do you call it

Anyway, see you next week for flight lessons, double dates and Duy is coming to take Michael Darby’s crown as Worst Househusband Ever!

Tourism could save a city in the Uintah Basin