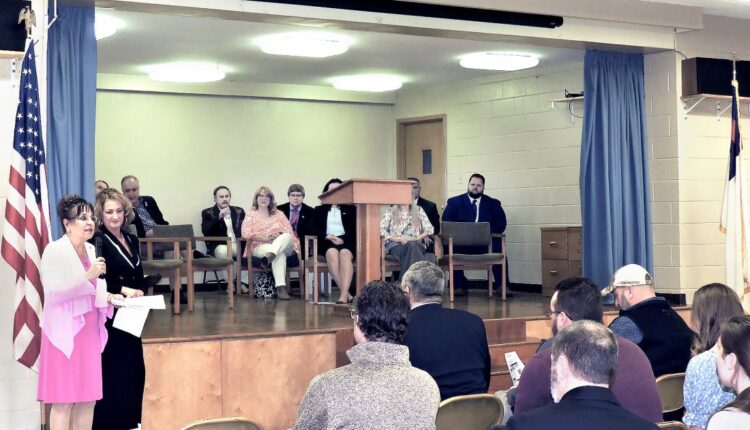 SHARING VIEWS — Fourteen candidates in the upcoming West Virginia primary participated in a forum event hosted by the Hancock County Republican Executive Committee, at Cove Presbyterian Church in Weirton Thursday. More than 65 area residents attended the event to hear from those on the ballot for the May 10 primary election. — Craig Howell

WEIRTON – More than 65 area residents gathered in the fellowship hall of Cove Presbyterian Church Thursday night to hear directly from a group of candidates set to appear on the May 10 primary ballot in West Virginia.

“We have in attendance 14 candidates,” explained Tommy Ogden, a member of the committee, who also served as moderator.

During the third part of the event, candidates were asked questions from the audience.

Mary McKinley, wife of US Rep. David McKinley, RW.Va., also was in attendance, and spoke to the audience about his work in Congress.

In addition to hearing from the gathered candidates, Liz Baldt, chair of the Hancock County Republican Executive Committee, also discussed the importance of the committee, representatives of which also are set to appear on the ballot.

“These people represent you. They take your voice and your concerns,” she said, explaining each county committee works with the state committee to help develop policy and political platforms.

Early voting for the primary begins April 27, with the election on May 10.