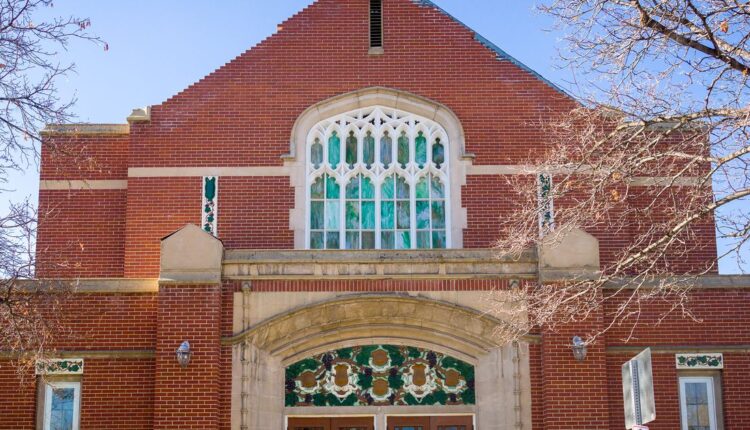 When a 5.7 magnitude earthquake struck the Wasatch Front in 2020, the Liberty Wells neighborhood in Salt Lake City was badly shaken. Many of the charming homes and historic buildings took the brunt of the quake, resulting in cracked foundations, fallen bricks, and expensive repairs. Structures damaged included the historic Latter-day Saint Chapel in Wells Ward, built in 1926.

Wells Ward Stake President Nathanial Carson couldn’t believe the destruction before his eyes when he saw the chapel after the earthquake.

“There were bricks and other debris that had fallen from the building in the parking lot and on the sidewalk,” Carson said.

The earthquake damage to the chapel’s unique architecture made it unsafe for Wells Ward members to congregate in it, forcing Latter-day Saints to close the doors and fence off the 1990 South and 500 East property, to protect passers-by from possible dangers such as falling stones.

“You could see that there was a lot of damage,” said Carson, “and it’s kind of heartbreaking.”

(Saige Miller | The Salt Lake Tribune) External damage to the historic Wells Ward Chapel from the 5.7 magnitude earthquake that struck Salt Lake City on March 18, 2020. Parishioners held a farewell meeting for the building on November 13, 2021 as Latter-day Saints’ Church of Jesus Christ prepares to sell the 95-year-old building.

(Saige Miller | The Salt Lake Tribune) External damage to the historic Wells Ward Chapel from the 5.7 magnitude earthquake that struck Salt Lake City on March 18, 2020. Parishioners held a farewell meeting for the building on November 13, 2021 as Latter-day Saints’ Church of Jesus Christ prepares to sell the 95-year-old building.

On Saturday afternoon, a few dozen people, both LDS and unaffiliated, gathered to bid farewell to the Wells Ward building that parishioners helped fund and build nearly a decade ago.

After 18 months of inspection, the Church decided it was time to put the Wells Ward property up for sale. Emotions were high as stake president Carson and longtime Wells Ward member Tricia Tate fought back tears as they spoke to the crowd about the memories made during the chapel’s 95-year history.

“It [Wells Ward] has a different feeling than modern assembly houses, “he said,” because the people in this neighborhood paid for it and built it. I think you can feel that when you are in the building. “

A struggle for survival

Ward and LDS members alike are concerned about the future of the historical structure. The idea of ​​leaving the property in the hands of a developer for demolition is the worst-case scenario for some.

“Not only is it architecturally unique and beautiful, it has also helped a lot of people. It helped the ward in general, not just members of the Church, through World War II, through the Great Depression, and other times, “Carson said. “I think the last thing any of us want to see is a contractor tear it down and build condos here.”

To the farewell guests, the Wells Ward building is more than just a meetinghouse. The property has community and spiritual significance.

“It is a literal embodiment of generations of activity, human life, pride, civic organization, and civic devotion and faith,” said David Amott, executive director of Preservation Utah, a statewide nonprofit advocacy for the preservation of historic monuments . “All of this is embodied very real and tangible in this building.”

The Wells Ward has been described as a community center where anyone could gather to watch a WWII movie or learn square dance.

Amott doesn’t want Wells Ward to leave the ward. Instead, he wants Salt Lake City or a private investor to work to restore the building to its original splendor.

And Amott is not alone in his wish. Salt Lake City Councilor Darin Mano wanted the city to buy the building and convert the space into a city library. However, after much discussion with the Salt Lake City Mayor’s Office and City Library, the idea doesn’t seem to be a reality.

“I don’t think there is currently a viable urban use for the building,” said Mano. “There are a few other things I’m still talking to, but unfortunately none of them are very hopeful.”

The cost of restoring and retrofitting Wells Ward to meet safety standards would take millions of dollars, Mano predicted. Salt Lake City taxpayers would have to pay the bill if the city decided to buy the building from the LDS church or any historic building.

“One discussion we, as a council, need to have with the community is what role Salt Lake City should play for us as a government in maintaining old buildings because it is a tax burden and would require a lot of taxpayers’ money,” said Mano. “But if the community wants that, maybe we can start restoring these old buildings and using them for community purposes.”

Amott believes the church sale will mainly lead to the demolition of Wells Ward.

“In my opinion, the LDS Church wants to make a clause that it will be demolished,” said Amott, trying to hold back tears, “which is really heartbreaking.”

However, church officials have not confirmed whether this is the case. According to Emily Tutt, a historic site curator in the church’s history department, church leaders are still deciding how best to sell the property.

“Our real estate team is working very hard to figure out the complexities of selling a building like this that has done a lot of damage,” said Tutt. “We don’t know exactly what will happen yet.”

While Wells Ward’s future is still in the air, Amott won’t stop struggling to keep the historic church building going for another 95 years.

“One thing that Preservation Utah does well is connecting people to buildings or connecting people to other people who are helping save buildings,” said Amott. “We will work hard to find the private investor, hopefully to convince the church that this building will be sold to an investor who will fix it and maybe use it as an event center or some sort of meeting room.”