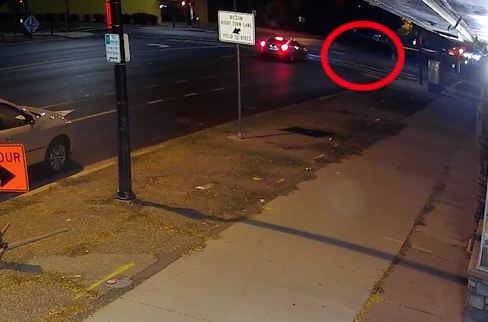 This partial screen shot from a Weber County prosecutor’s surveillance video shows a man in the red circle beginning to cross Washington Boulevard west to east. A car heading south is waiting at the traffic lights. Later in the video, a Weber State University police car drives the man northwards.

The agency published an update on the investigation into the death on YouTube on Wednesday. Prosecutors identified the victim as William Casselman, 69. Initial reports from Ogden police last week described the man as a 27-year-old.

Weber state official, who was on routine patrol towards downtown WSU, was taken on paid leave pending investigation. The crash occurred at 10:41 p.m. at or near the intersection of 27th Street.

The video of a store in west Washington is at a sharp angle from across the street. The picture shows a man crossing the street from west to east and the car that meets him in a lane heading north. The car stops and its emergency lights are activated. The officer gets out, walks up to the man and kneels next to him. Ogden Police said the officer performed CPR last week. The man died on the scene.

Prosecutors said there was no video of the incident or a body camera. The Weber County Force investigative team is conducting the investigation and a final report will later be presented to the prosecutor. Such investigations follow protocols established for deaths involving law enforcement officials.

Weber State University has not commented on the ongoing investigation. The officer, whose name was not disclosed, was not injured in the crash.