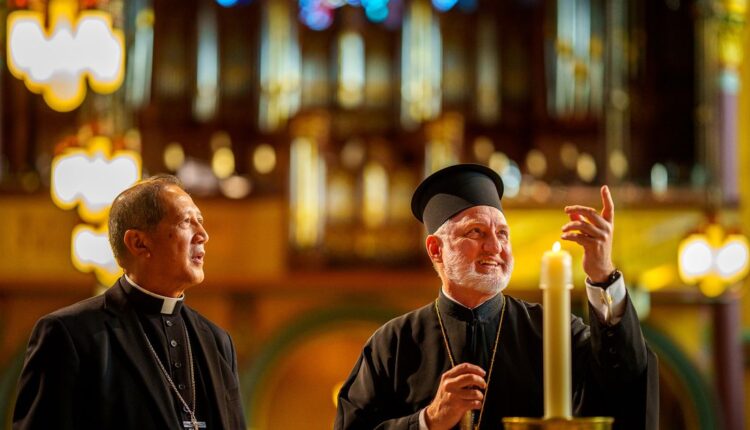 The links between Eastern and Western Christianity became clear on Tuesday during a visit by the head of the Greek Orthodox Church in America with Utah’s leading Roman Catholic leader.

Together they – and representatives of the Interfaith Roundtable in Salt Lake – emphasized the importance of dialogue and the need for interreligious unity.

The Tuesday evening reception was hosted by Bishop Oscar Solis, who presides over 300,000 Utah Catholics, at the Diocese of Salt Lake City Pastoral Center.

The group then toured the Madeleine Cathedral in downtown Salt Lake City.

In his remarks on the Interreligious Roundtable, Elpidophoros emphasized the importance and effect of dialogue in interreligious relationships.

The Greek word “dialogue” generally refers to “an extraordinarily diverse set of realities”, a definition which he said “resonates strongly” in an interfaith context.

“Dialogue becomes the key,” he said, “in which we are all called to dissolve our divisions, heal hatred, promote resilience, fight prejudice … [and] Promote peace and reconciliation. “

Elpidophoros said the Greek Orthodox Church recognizes differences but believes in cooperation and peace between faiths. That means really listening to other points of view and accepting common values.

“Make your faith, make your tradition richer,” he said. “Wealth comes from ecumenical values” [of] listen to others [and] Receive what is good. “

These relationships “determine the course of our vision and mission as a Catholic community,” he said. “We came from one God and we are all children of God. … And therefore we can easily see ourselves as brothers and sisters. “

Muslim makes its own sacrifice

Elpidophoros especially thanked Zeynep Kariparduc, chairman of the Salt Lake Interreligious Council and a Muslim woman, for attending the event where she could have celebrated Eid al-Adha or the Festival of Sacrifice with family and friends.

A native of Turkey, Elpidophoros said he understood the meaning – yes, the sacrifice – that Kariparduc missed part of the multi-day Islamic holiday.

He presented her with a silver medallion made in Istanbul depicting Abraham or Ibrahim (a prophet revered in Christianity, Islam and Judaism) and his wife Sarah with three angels.

(Trent Nelson | The Salt Lake Tribune) Archbishop Elpidophoros of America presents a medallion to Zeynep Kariparduc during a visit to the Madeleine Cathedral in Salt Lake City on Tuesday, July 20, 2021.

He also gave Solis a silver cross from Istanbul.

Kariparduc said people from different religious backgrounds should get to know each other so that they can better practice their own beliefs.

Tuesday night’s meeting is important, she said, because if the faith leaders get along, their followers will get along too.

“We cannot create a diverse society without each other,” she said. “Faith leaders play a very crucial role in establishing it[ing] peaceful societies. “

In an interview with The Salt Lake Tribune, Elpidophoros said it was important for him to visit every state and municipality in the United States

In Salt Lake City, he said there are two large churches, “so we had to come.”

Although the New York Greek Orthodox Church is represented across the country, Elpidophoros says these members have much in common with their brothers and sisters in Salt Lake City. Many of them have ancestors who came to the United States to pursue the American Dream; they pray, go to school and perform together at cultural events.

“For us, the church is always the place where we keep our identity alive,” he said, “… [our] cultural, linguistic and religious identity. “

At the same time, according to Elpidophoros, each community adapts in different ways to its state and its community. Therefore he wants to get to know firsthand the needs and expectations of each parish.

More meetings are waiting for you

(Trent Nelson | The Salt Lake Tribune) Archbishop Elpidophoros of America and Bishop Oscar A. Solis will meet in the Catholic Diocese of Salt Lake City on Tuesday, July 20, 2021.

Elpidophoros’ historic visit this week comes when Utahns marked the Mormon pioneer entrance to the Salt Lake Valley some 174 years ago.

It is “a little unprecedented” for an archbishop to visit a place for almost a week, said Rev. Archimandrite George Nikas, the presiding priest of the Greater Salt Lake Greek Orthodox Church. “That’s why we’re very excited and honored that this is taking place.”

During his visit, Eliidophoros met a number of leading government and religious leaders.

He will meet Governor Spencer Cox on Wednesday afternoon and the ruling First Presidency of The Church of Jesus Christ of Latter-day Saints and Salt Lake City Mayor Erin Mendenhall on Thursday morning. He is scheduled to meet with Rep. Burgess Owens, R-Utah, on Saturday.

The Archbishop will also spend time in Wasatch Front Greek Orthodox churches, including the Holy Trinity Cathedral in downtown Salt Lake City, the Prophet Elias in Holladay, St. Anne in Sandy, and the Transfiguration Church in Ogden.

Nikas said he and other Utah Greek Orthodox leaders will brief Elpidophoros on the community’s philanthropic work, as well as progress on the Church’s $ 300 million Greek city to be built around Holy Trinity Cathedral.

Nikas said Elpidophoros, who was appointed to his new position in 2019, was a native of Istanbul and a longtime professor of theology. He made headlines last year when he participated in a protest against Black Lives Matter in Brooklyn.

“It is our moral duty and obligation to uphold the holiness of every person. We have seen a pandemic of serious physical illness, but the mental illness in our country goes deeper and needs to be cured both by deeds and words, ”he told the Greek reporter at the time. “And so I will continue to step into the breach together with all those who work for peace, justice and equality for every citizen of good will, regardless of race, religion, gender or ethnic origin.”