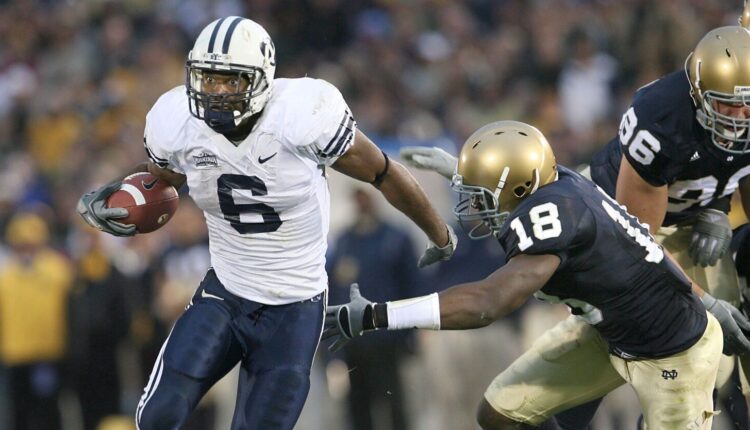 True friends do things for each other.

If independence taught BYU anything, it’s that Notre Dame was never really his friend. Oh, the Irish said all the right things initially — like announcing a six-game series on the same day the Cougars declared their independence from the Mountain West Conference, including two games to be played in Provo.

Did they really intend to keep that agreement? Cougars athletic director Tom Holmoe consistently said yes, but the passing seasons seemed to say otherwise. If the Irish had any plans of coming to LaVell Edwards Stadium, they either lost them or changed them after being reminded of their last visit in 2004. It also doesn’t look like they intended to have the Cougars back to South Bend beyond the 2012 and 2013 meetings.

If they did, it would have happened by now. In fact, the Oct. 8 game in Las Vegas this fall will their first meeting since 2013. It also comes during the Cougars’ final year as an independent. If you add them up, the series that called for six games is ending at three, with no trips to Utah. Some friend.

So, what happened? As with most fading friendships, things just seemed to get in the way. Two years into BYU’s independence, the Irish made a new friend with the ACC and committed to playing five league opponents each year. This dramatically altered their future scheduling opportunities, much like the Big 12 invitation is doing to BYU.

In addition, it made sense for the Irish to soften their schedule. As a Power Five independent, with the goal of making the College Football Playoff, Notre Dame cannot afford more than two losses in a season. Why take an additional risk against a program it watched derail Texas, Wisconsin, Michigan State, Nebraska and Tennessee — and all on the road?

The best thing the Irish did for BYU was announce that six-game series when they did, which gave the Cougars optimism that with friends like Notre Dame and ESPN, they could survive as an independent.

Happily for BYU, ESPN stayed true, and the Cougars discovered better friends, with Boise State perhaps the best of them all.

The Broncos have scheduled the Cougars every year of BYU’s independence and extended the agreement through 2034 before the Big 12 announcement. They even agreed to play BYU during the 2020 COVID-19 season when the Broncos only played six regular-season games.

Even more impressive, Boise State often scheduled to play the Cougars in November — the toughest month for an independent to find a good foe. This year, the Broncos host BYU on Nov. 5 in the final meeting between the two teams.

When Sgt. Pepper sang “I get by with a little help from my friends,” he had to be singing about life as an independent — not named Notre Dame. BYU has gotten by with friends who have agreed to contracts and kept them. Teams like Texas, Baylor, Wisconsin, Virginia, Boise State, Utah State, and most of the Pac-12, signed on the dotted line and showed up to play. Now those programs were friends to BYU.

Life in a conference restricts a team’s independence. It will also alter BYU’s longtime partnership with ESPN. The Cougars’ new life in the Big 12 and Notre Dame’s ACC agreement are literal game changers. It’s just a shame that when the six-game deal was announced, on Sept. 1, 2011, the Cougars and Irish looked like they were going to be friends.

The closest to Provo Notre Dame is going to get is Allegiant Stadium, 377 miles to the south. What the Irish may not realize is Las Vegas is BYU’s home away from home, and while it may not be Edwards Stadium, an army of patient Cougar fans will be there, ready to give Notre Dame some home cooking.

The ninth and final meeting will be the last battle as true independents and will cap a relationship that appeared to be so much more than what it turned out to be.

Here’s a quick look at how the other eight meetings between the two teams played out.

october 16, 1993: (Provo) Cougars quarterbacks John Walsh, Steve Clements and Tom Young all saw action, but nobody could contain Lee Bectin. The Irish running back ran for 122 yards and a touchdown to lead No. 3 Notre Dame to a 45-20 win at Provo.

october 15, 1994: (South Bend) Chad Lewis blocked a Notre Dame field goal late in the third quarter and triggered the Cougars’ game-winning drive. Jamal Willis scored his second touchdown of the game with 14:57 remaining in the fourth quarter to upset the No. 17 Irish 21-14.

october 20, 2012: (South Bend) Riley Nelson threw a touchdown pass to Kaneakua Friel to give the Cougars a 14-7 lead in the second quarter, but the No. 5 Irish scored 10 unanswered points in the second half to win 17-14 in BYU’s first season as an independent.

Nov 23, 2013: (South Bend) Taysom Hill’s lone shot at beating the Irish fell short 23-13. Hill rushed for 101 yards and passed for 168 and a touchdown in the loss. The late November showdown had intermittent snow showers, temperatures in the 20s with wind gusts up to 30 mph.