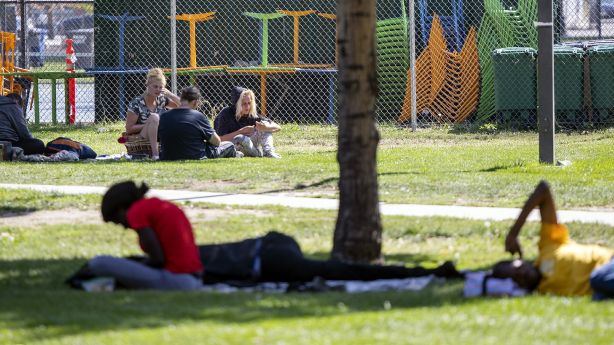 People sit and sleep in Pioneer Park in Salt Lake City on Tuesday. The Pioneer Park Coalition on Tuesday called for immediate action to tackle the rise in crime and other illegal activity in and around the park. (Scott G. Winterton, Deseret News)

SALT LAKE CITY – Just a week after the Salt Lake City Mayor and Police Chief held a press conference at Pioneer Park saying that general crime trends in the city are moving in a better direction, members of the Pioneer Park Coalition gathered in the same place to get a damning review of this assessment and the leaders who have made it.

“Our town’s mayor and police chief are sitting right here and telling us that crime is falling,” said Tyler Clancy, executive director of the Pioneer Park Coalition. “Well, the bottom line is this: you can slice and dice the numbers however you want to tell a particular story, but there is clearly a division between City Hall and the people who live and work in Rio Grande Pioneer Park.”

However, a statistics report released today by the Salt Lake City Police Department also showed that when compared to the 5-year average for the Rio Grande area, total crime increased 4.3%, property crime decreased 4.7% and total violent crime in the area The same average for the region was down 2%.

At last week’s conference, Salt Lake City Police Chief Michael Brown said additional officers have been assigned to areas that require the most attention based on the data collected, such as Pioneer Park. He added that the department was also involved in “comprehensive crime containment efforts” in the Rio Grande neighborhood.

“We will not leave criminal activity unhindered in our city. For those who say there is lawlessness in Salt Lake City, you are wrong, ”Brown said at the conference last week.

But the Pioneer Park Coalition, a grassroots group that describes its mission as revitalizing the park and providing solutions to social problems, still described downtown Salt Lake City as a “crisis” and “dire situation” in terms of the public Security and homelessness. Coalition members speaking at the conference on Tuesday pointed directly to leaders for the decline in public safety in the city.

He continued, “It is not okay to allow lawless camps in residential and mixed areas, destroying businesses and residents who have spent decades building lots of businesses are leaving the city. And it’s bad for the homeless population. It’s not compassionate, it’s not humane. It’s just bad public order. “

Salt Lake City Mayor spokeswoman Erin Mendenhall, Lindsey Nikola, issued a statement indicating that Mendenhall’s approach has led to both homelessness and public safety. Nikola pointed to Mendenhall’s work with the US attorney, Utah Public Safety Officer, and US Marshal to help arrest “serious criminals,” expand the work of ambassadors downtown, paying for Increase first responders and their coordination with Brown regarding public safety.

“Mayor Mendenhall is a leader who has consistently made the safety of our city’s residents, visitors and business owners a priority,” Nikola said in a statement.

Many of the main concerns of the speakers were about the homeless camps across the city. Homeless camps took center stage when the COVID-19 pandemic hit and the camps appeared to be spreading across the city. The pandemic posed a unique dilemma for government leaders and public health officials dealing with homelessness.

Shelters reduced the capacity to follow the Centers for Disease Control and Prevention guidelines on social distancing and tried to contain outbreaks. Some people affected by homelessness stayed on the streets for various reasons, some citing fear of the virus. Members of the Pioneer Park Coalition criticized Mendehnhall’s “lack of enforcement” of the city’s camping ordinance.

CDC guidelines for officials regarding homelessness amid COVID-19 advised leaving camps alone. The CDC reiterated that breaking camps could isolate homeless people from resource providers who regularly visit those camps, and the virus could continue to spread to surrounding communities.

“It’s a double-edged sword because what do we see in the camps? We see violence, we see a drug overdose, we see other things, there are COVID-19 outbreaks, “Clancy said. “We need a 24/7, 365 solution. We cannot find crisis to crisis to crisis and excuses.”

While the CDC’s recommendations are guidelines only, proponents have cited a ruling by the 9th District Court ruling that cities cannot close camps or enforce laws banning camping unless adequate accommodation is available. But former US District Attorney John Huber pointed out that Utah is under the 10th District, arguing that the camps are still signs of lawlessness.

“There is a lot of lawlessness in the city that is not sensibly addressed. Officials and elected leaders appear to have shed their responsibility for this pervasive lawless feeling and reality in downtown Salt Lake City, “Huber said.

He continued, “We are not advocating unfair treatment of the homeless. Rather, we advocate the same application of the law … This is a choice to live on the streets, camp on our public property and … create these attractions for crime and lawlessness. There are shelters that the government and private investors have invested heavily in and resources that are now available to homeless people in dire circumstances. “

However, Mendenhall pointed out that if the camp laws were to be enforced more consistently, it would be necessary to ensure that the system had sufficient resources and emergency shelter to meet the needs of the unprotected.

Last month, the mayor outlined what she identified as four imperatives to address the rise in unprotected homelessness:

Mendenhall has consistently urged other cities across the state to meet the growing demand, saying Salt Lake City has done significantly more than its fair share in addressing the nationwide crisis.

“Salt Lake City makes up only 17% of Salt Lake County’s population, but the expansion of bed capacity in the nationwide homeless service system seems to be primarily focused here. New shelters must also be brought online in jurisdictions across the county to achieve a better balance. “The system,” Mendenhall said in a statement on the possible shelter in the Ballpark neighborhood.

Despite the mayor’s criticism during the conference, Huber seemed to agree with the opinion.

“We urge the governor to devote resources to this capital; the rest of the state cannot remain in a pristine state while our capital city is in decline. ‘To come together, to put down their ego and their territorialism and to come together and make a difference in a city that is crying out for help, “said Huber.