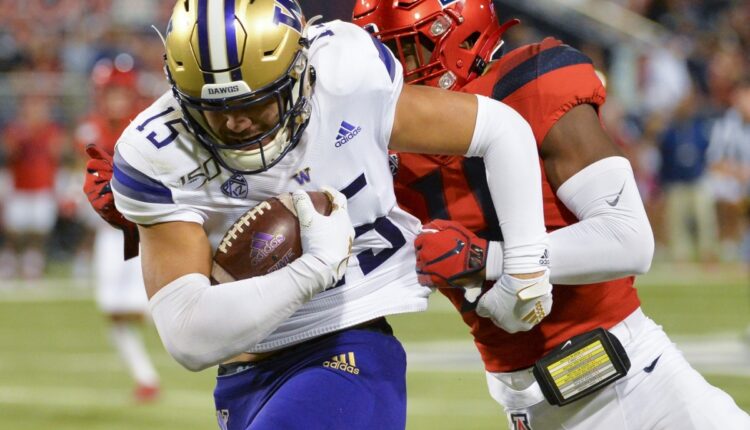 Based in Provo, Utah, the two brothers have signed scholarship agreements to attend their home university and join the BYU soccer program for the upcoming season. Sampson, a 6-foot-3, 195-pound graduate transfer, will be senior in 2021, while Puka, a 6-foot-1, 210-pound transfer, is returning to Provo for a sophomore year.

“We are very excited about the new signings from Sampson and Puka,” said Sitake. “You are both seasoned and talented recipients and come from an amazing family and large number of soccer players who come through BYU. Her character and leadership will be a great addition to our program and our university and will add to the great culture that has already been established here at BYU. “

Puka was an All-American first-team player and Utah’s Player of the Year at Orem High School in 2018 before playing for Washington for the last two seasons. Puka demonstrated his great talent, averaging 19.9 yards per reception for the Huskies in his two seasons, while scoring a total of 319 yards and three touchdowns in 16 receptions. He scored a career touchdown of 65 yards against Arizona in 2020 and was able to prevail against the Wildcats with 49 yards in 2019 to claim victory as the UW Offensive Player of the Game after a total of 97 yards. Puka was also named the UW Coaches Offensive of the Game after taking six catches for 67 yards in the team’s win over Utah last season.

A freshman in 2019, Puka played three starts in the first eight games, contributing 168 yards and two touchdowns before his season was abandoned due to an injury. Two of his starts as a true rookie were wins against USC and BYU. In 2020, he hit a total of 151 yards and a touchdown on nine receptions in just three games during his season shortened by the pandemic. He played a total of 11 games in two shortened seasons in Seattle.

Sampson joins BYU after playing 45 career games for Utah, including eight starts, while completing 1,015 yards and 11 touchdowns at 82 receptions from 2017 to 2020. After moving to Salt Lake City from Timpview High as a first-team all-state player at school, Sampson redshirted the 2016 season before becoming a fixture on the field for the Utes for the past four seasons. He averaged 12.4 yards per catch overall, including the best 18.3 yards per reception in his last full season in 2019, and also led the Utes in receiving touchdowns in 2018.

Sampson missed just one game in four years, making 29 receptions for 294 yards and one touchdown as a redshirt freshman in 2017 before adding 362 yards and five team-level touchdowns at 31 grabs in 2018 for his sophomore year. He added 330 yards and added four hits among his 18 junior receptions in 2019, including an 83-yard touchdown catch against UCLA, the tenth-longest reception in Utah football history. During the 2020 Utah season shortened by the pandemic, Sampson played four out of five games, adding four catches for 29 yards while also making his first career punt return for 18 yards against USC.

Penina’s sons and the late Lionel Nacua, Sampson and Puka are joining BYU, where older brothers Kai and Isaiah both previously participated as members of the football program. Kai played for the Cougars as a defensive player from 2013 to 2016 before moving to the NFL, where he is currently with the San Francisco 49ers.

You have probably noticed that our website looks a little different. It is currently under construction and the comment function is disabled. While we’re working on some exciting updates to improve your experience, you can ask us questions through one of our social media channels: