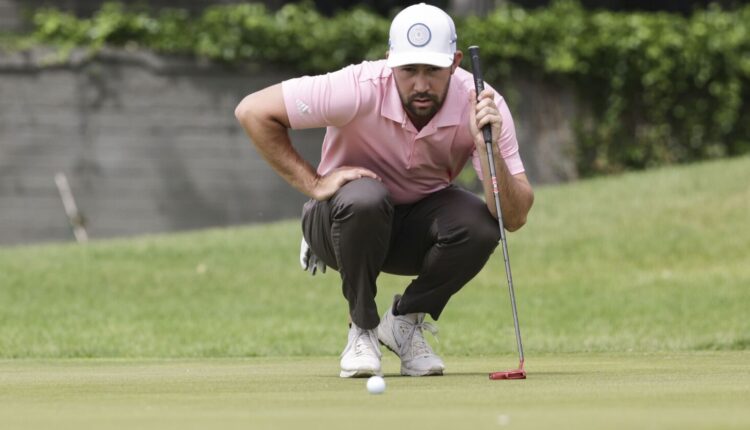 Justin Shluker made only one mistake Sunday before his final round of the Richard C. Kramer Salt Lake City Amateur golf tournament at Bonneville Golf Course.

The 27-year-old accountant showed up at the course for his mid-afternoon tee time wearing pants when almost every other contestant in the field wore shorts on a beautiful 78-degree day on Salt Lake City’s east bench.

His self-admitted apparel gaffe notwithstanding, Shluker was mostly perfect in carding a second straight round of 5-under-par 67 and cruised to the win in only his second appearance at the revered and historic City Am.

His 10-under total of 134 was three shots better than Ryan Brimley, who closed with a 66 on Sunday to make things mildly interesting down the stretch.

“I had no idea where things were. I figured if I could get to double digits, I had a good shot. If somebody came in and beat me and I did that, then all props to them.” — SLC amateur champion Justin Shluker.

“It’s a really big win,” said Shluker, a former Park City High star who played collegiately for Sonoma State in California and now resides in Murray. He does accounting and finance work for a California-based bio-tech company to make a living.

Murray’s Brimley, a former college basketball standout, said it was his third or fourth runner-up finish at this tournament.

Devin Tovey and University of Utah golfer Braxton Watts tied for third at 6-under 138, while Evan Lawrence and Cameron Howe tied for fifth.

Playing in the Brighton Flight, Nicholas Katsanevas made a hole-in-one on No. 9, the tricky downhill par-3 with a two-tiered green, but this day belonged to Shluker, who was tied with Highland High rising senior Nason Jones at 5-under when the day began.

Jones quickly fell off the pace with a tough front nine, but Shluker says he never really knew where he stood in relation to the lead.

There were no leaderboards on the course, and few players posted their scores electronically so everyone was pretty much in the dark.

“I had no idea where things were,” Shluker said. “I figured if I could get to double digits, I had a good shot.

If somebody came in and beat me and I did that, then all props to them.”

Brimley, who said he “left a few out there” on Saturday that eventually kept him from claiming the trophy, figured he needed at least a 65 to get himself into a playoff.

Didn’t happen, and wouldn’t have mattered.

Shluker was that good; Defending champion Cooper Jones, the youngest winner in SLC Am history, shot 12-under last year to win the title but couldn’t play this year because he is playing in a US Open qualifier event on Monday.

Shluker said his plan Sunday was to keep the ball in the fairway, avoid downhill putts and take advantage of the reachable-in-two par-5s.

“The course is just awesome,” he said. “Like, they did such a great job setting it up. I just stuck to my game plan and made a couple of putts.

“Honestly, that is what made a difference.”

“I knew I still had holes to play (after the birdie bomb),” he said. “It is not over until it is over. I had to have good shots coming in, and again, give myself as many opportunities as I could.

“That was basically it.”

Shluker said the win was probably his biggest in Utah — he won some college tournaments — and sets him up for a decent summer.

“Yeah, I don’t practice much. I just play a lot and come out and play as well as I can.”

Even in long pants.