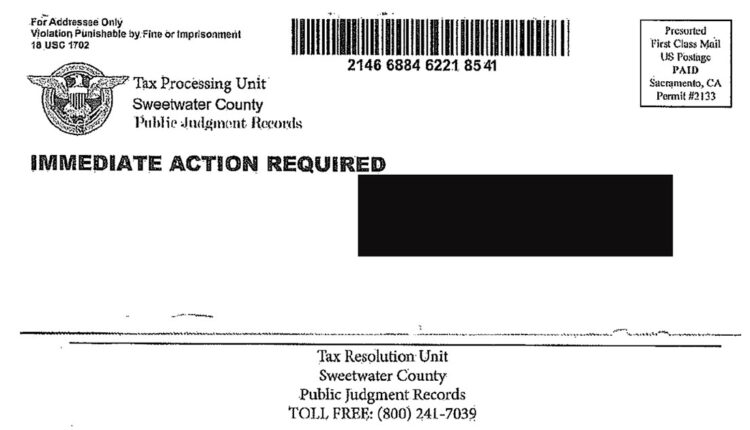 The envelope included an official-looking emblem and the phrase “IMMEDIATE ACTION REQUIRED.” The enclosed document was a ‘Distraint Warrant’ informing the recipient of unpaid tax debt that had resulted in a lien against their property. Neither the Sweetwater County Treasurer’s Office nor any other department within the county government has a Tax Processing Unit or Tax Resolution Unit.

“This happens once or twice a year, resulting in confusion and concern among folks in Sweetwater County. We’ve reached out to the senders via the included telephone number to find out why they’re misrepresenting themselves as being from our office, but that usually results in a quick hang-up or unproductive exchange followed by a hang-up,” Sweetwater County Treasurer Joe M Barbuto said.

“We forward the information to our County Sheriff and Attorney. As a reminder, any official letters or documents sent from our office will always include the name of the Sweetwater County Treasurer and our local mailing address. Anyone unsure or concerned about something they receive is encouraged to contact our office,” he said.