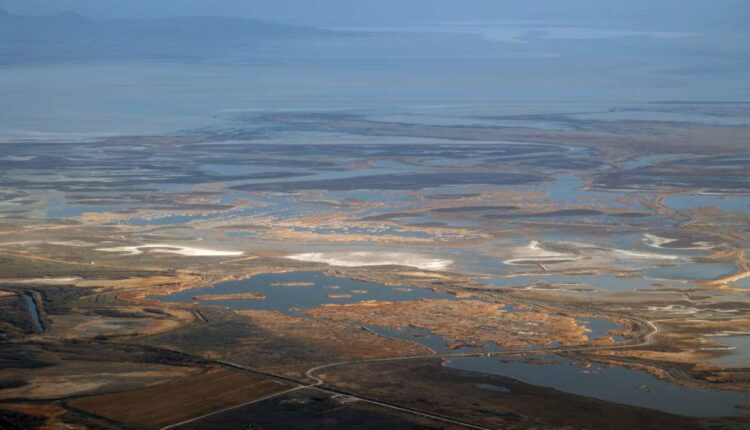 The Great Salt Lake as seen on Tuesday, Feb. 15. The lake is projected to drop another 2 feet this year. (Scott G. Winterton, Deseret News)

SALT LAKE CITY — The projection that the Great Salt Lake may hit a new record low this year is pressing Utah political leaders to do more to protect the massive water body.

Lt. gov. Deidre Henderson confirmed to FOX 13 News she will be taking state officials and elected lawmakers on a boat tour of the Great Salt Lake next week as they look at solutions.

“It’s one thing to talk about it, to hear about the problem, it’s quite another thing to go experience them,” she said Thursday. “To see first-hand what the problems are and to hear from the people who work there, who know what’s happening, what has happened historically, what is happening now so we can figure out what we can do to help solve the problem.”

At a briefing before the Salt Lake County Council earlier this week, the Utah Department of Natural Resources warned that the Great Salt Lake may drop another two feet this year to a new historic low.

“It’s a terrible concern to all of us, not just because one of our treasured natural resources is disappearing,” Lt. gov. Henderson said. “Because of the long-term larger ramifications — ecological, economic, environmental impacts — that will have on the state.”

The Great Salt Lake has already shrunk 11 feet since it first started being measured in 1843. Last year, it hit a record low, as a result of diversion, drought and a changing climate. State officials fear a looming environmental and economic catastrophe.

There’s reduced economic benefit from the lake itself, the threat of toxic dust storms in populated areas of the state, a reduced snowpack that impacts the area’s climate and causes harm to the lucrative ski industry and other harms that may be experienced.

“It should come as no surprise to any of us that the lake is likely to break another record low elevation this year. With an unfortunate series of disappointing water years and a deficient snowpack, it’s no wonder Gov. (Spencer) Cox has declared a state of extreme drought for Utah,” said Lynn de Freitas, the executive director of Friends of Great Salt Lake.

“As (Salt Lake County) Mayor Jenny Wilson said, we all have to do our part to responsibly address these extraordinary circumstances. And that includes doing our part to sustain the Great Salt Lake ecosystem for the future,” de Freitas added. “Great Salt Lake belongs to all of us as a public trust resource. It’s ecologically significant to millions of migratory birds that rely on it for their future. And it’s economically significant at a contributor of $1.32 billion to Utah’s annual GDP. The lake is also calling to all of us. Let’s give it our best.”

The Utah Legislature passed a number of bills this year aimed at water conservation for agriculture and residential use, as well as getting more water into the Great Salt Lake. Some of those will go into effect in a couple of months. House Speaker Brad Wilson, R-Kaysville, personally sponsored a bill to spend $40 million to try to get more water for the lake.

“The Legislature remains concerned and engaged in preserving and conserving the Great Salt Lake. It is a good thing we acted when we did because the challenge persists and may even be accelerating,” Wilson said in a statement to FOX 13 News. “The lake is a big ship to turn and solutions will take time to put into place and produce results. We will continue to look at policy solutions, but it will take a concerted effort of all stakeholders and Utahns to make a real difference.”

The Great Salt Lake Marina has removed boats because water levels are so low. The Salt Lake County Council was told this week that dredging will need to take place to ensure search and rescue teams can get to the water in case of emergency.

That would include the controversial Bear River development project in northern Utah, that would divert water going into the lake for population demands. The Bear River is one of three rivers that go into the terminal basin of the Great Salt Lake (the others are the Jordan and Weber rivers).

“If we make continuous efforts and conservation, we’ll be able to put off the Bear River project to 2065, which is much further, much later than we thought we would need it,” she told the county council.

“Conservation right now is the most important thing people can do as we put together these longer-term plans,” she said.

Friends of Great Salt Lake is planning a two-day summit next month to discuss the problems facing the lake and potential solutions. You can find out more information about it here.